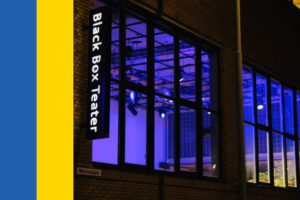 When I wrote the editorial for this edition of the festival at the mid of February, we were filled with a positive mindset and energizing momentum. After two years of a pandemic that severely affected the art field (among others), we had just begun to rejoice that the festival could take place in real life, without restrictions.

But this lightness did not last for long. This edition of the festival is opening during tragic times, which plunge us into gravity. Putin has decided to invade Ukraine, and by doing so, he is threatening democracy and peace – not only in Ukraine, but all over Europe. The Russian invasion of Ukraine by Putin is causing significant civilian casualties and pushing Ukrainian families to flee to neighboring countries. This biggest European war since World War II is putting Europe at stake, threatening stability and sovereignty principles.

We condemn the Russian invasion of Ukraine and stand in solidarity with Ukraine and Ukrainian people in their fight for freedom, independence and democracy. Our thoughts also go to the artistic community, in neighboring countries and all over Europe, which is mobilized to offer shelter and assistance. Not least, we think of the artists, intellectuals and people in Russia who are risking their lives when taking a clear stand against the invasion of Ukraine.

This context invites us to rethink what the role of art and theater is under such circumstances. The very foundation of the European Coal and Steel Community, established by Robert Schuman in the 50s, was to build alliances in order to prevent wars and protect democracy. His aim was to "make war not only unthinkable but materially impossible”. In France, André Malraux, the then minister of culture, said “never this again” after the Second World War, and decided to establish programming theaters and cultural houses all around the country., He believed in the potential of art to prevent obscurantism and human madness. Every war shakes questions related to democratic principles, critical thinking and freedom of expression, media control, energy supply and economic power. Nowadays, we see that the collective European apparatus is not sufficient, when one man has decided to have his name written down in history books in Russia, next to the tsar and others. Nevertheless those existing structures contribute to solidarity mechanisms and common actions, even if they appear to be insufficient. Witnessing the capacity of resistance from the Ukrainian people and the solidarity around Europe indicates the power of the collective.

It may sound schizophrenic to run a festival celebrating collectiveness and togetherness in times of war. This might also be an opportunity to dig further into the potential of the collective. How do we navigate between the individual, the collective and the broader context? Can we, as art institutions contributing to building temporary communities, be a space that stimulates mutual understanding, empathy, solidarity and healing?