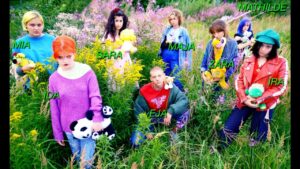 The Danish director Annika Berg’s debut film, Team Hurricane, is a portrait of eight 14 to 17-year-old girls. Meet a group of unique and eccentric teenagers! As they struggle with their own painful realities like eating disorders, gender identity and self-harm, they find safety and warmth in their own punk-ish girl-gang. Their free space – a local youth club – is closing down. As a response to this devastating event, they decide to host an art exhibition – a way to leave with style.

The style of Team Hurricane is as punk and multifaceted as the characters portrayed in it. Unfolding as a stream of consciousness, it is a crossover between documentary and fiction, packed with montages and pop cultural images as flashy fonts, instagram, video blogs and 90s web aesthetics. Team Hurricane is a gem that presents an unfamiliar female perspective, both in front of and behind the camera.