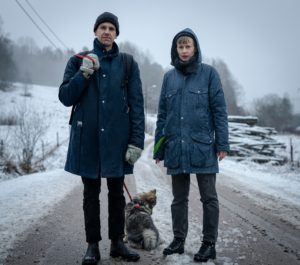 Lost Girls is a duo consisting of artist and writer Jenny Hval and multi-instrumentalist Håvard Volden, who have collaborated on different projects for more than ten years.

Their record Menneskekollektivet was created in-between set structures and the energy of collective exploration. The title is Norwegian and translates to human collective, which adds to the feeling of a recording made as part of a strange, improvised performance project.

The music flickers; between club beats and improvised guitar textures; between spoken word and melodic vocal textures; between abstract and harmonic synth lines. Throughout the piece, Volden’s guitar and Hval’s voice come across as equals, wandering, wondering, meandering. Sharing the space.

Lost Girls leave both form and content, music and words, suspended in a piece in the puzzle of human performance.

A human performance that resembles a rave party, but after the party’s over and the music has been switched off. What is left is a collective inner monologue: The ravers have forgotten that the night can end, and as the sun rises, they slowly turn to stone, or melt down to water, or they are in the middle of some other metamorphosis that is more than just coming down.